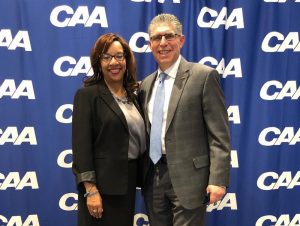 Jackson has most recently served as the Deputy Director of Athletics/Chief of Staff and Senior Woman Administrator (SWA).

“I look forward to working closely with President Williams in this new role and expanding my leadership with our Administration, coaches and athletics staff as we continue to build leaders and champions,” adds Jackson. “I welcome the opportunity to lead Hampton Athletics into our next chapter, as well as help deliver the #1 student experience to our student-athletes.”

Jackson has played an integral role in the progression and success of Pirate Athletics, collaborating on the strategies for conference re-alignment, academic excellence, and national exposure.  She was the catalyst of the revitalized APR program at Hampton, implementing a program which garnered a perfect score of 1,000 for multiple teams annually. These scores placed the Pirates in the top 10% in the nation while the football team had the highest scores of any HBCU football team in the country. Jackson has also utilized her development and grant writing skills to bring in over a million dollars for the department of athletics through the crafting and implementation of multiple grants.

Dr. Jackson serves as the sport administrator for multiple teams including football and men’s basketball and was the lead administrator behind the addition of women’s soccer, men’s lacrosse and women’s triathlon to the program.

On the national level, Dr. Jackson has represented Hampton University as a member of the NCAA Division 1 Council, NCAA Women’s Basketball Oversight Committee, and NCAA Accelerating Academic Success Program Selection Committee. As a member of the national organization, Women Leaders in College Sports, Jackson presently serves as co-lead of the Title IX Circle as a subject matter expert. She is also a former member of the Board of Directors for the Minority Opportunities Athletics Association (MOAA).

Jackson came to Hampton with a multitude of extensive employment experience. She has over 20 years of experience in sports which include previous opportunities to sit in the Athletic Directors seat at both Savannah State and Lincoln University where she gained the distinction of being the only African American Female AD with two national championships under her leadership within the same year. She also spent 5 seasons with the NFL Atlanta Falcons as a part of the Public Relations/Game Day Operations Staff.

Dr. Jackson is the CEO of Sports Enfocus, LLC, a public relations and development firm dedicated to sports entities and personalities and also consults on compliance, Title IX and diversity and inclusion. Under this umbrella Jackson founded the Minority Trailblazers in Sports Conference which has a mission to assist those seeking a career in sports and also provide another networking platform for those already in the business.

Jackson is a graduate of Southern University with a bachelor’s degree in broadcast and print journalism and also earned an MBA in marketing from Clark Atlanta University. Recently, she earned her PhD in Education with a specialization in Athletic Administration from Northcentral University.  Her dissertation was entitled “The Barriers of African American Women Seeking Leadership Positions in Collegiate Athletic Administration”.