The House Jan. 6 committee voted to refer criminal charges to the Justice Department for former President Trump and lawyer John Eastman for their alleged roles in the attack on the U.S. Capitol.

“The whole purpose and obvious effect of Trump’s scheme were to obstruct, influence, and impede this official proceeding, the central moment for the lawful transfer of power in the United States,” committee member Rep. Jamie Raskin said.

The committee made four criminal referrals for Trump: Obstruction of an Official Proceeding; Conspiracy to Defraud the United States; Conspiracy to Make a False Statement and “Incite,” “Assist” or “Aid and Comfort” an Insurrection.

But referrals by Congress are merely recommendations, and the Justice Department is under no obligation to bring charges against those referred for prosecution. Still, the committee’s referrals could increase political pressure on the department to act, and lawmakers could unveil new evidence in their final report that federal prosecutors have not yet accessed. 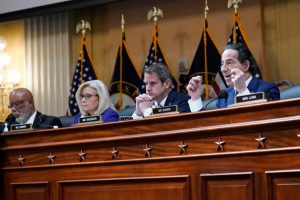 The committee also recommended four Republican members of Congress to the House Ethics Committee for punishment for their failure to comply with the committee’s subpoenas. Those four are: House Minority Leader Kevin McCarthy and Reps. Andy Biggs, Jim Jordan and Scott Perry. Under the new GOP House majority, McCarthy is running to be the next speaker, and Biggs plans to challenge him.

Committee chair Rep. Bennie Thompson emphasized how important “accountability” was for Trump and his allies. “Accountability that can only be found in the criminal justice system,” Thompson said. “We have every confidence that the work of this Committee will help provide a roadmap to justice, and that the agencies and institutions responsible for ensuring justice under the law will use the information we’ve provided to aid their work. And for those of you who have followed this Committee’s work, I hope we have helped make clear that there’s a broader kind of accountability. Accountability to all of you: the American people.”

The proceedings mark the culmination of the panel’s nearly 18-month-long investigation into the attack on the U.S. Capitol, which featured testimony from dozens of witnesses and a series of high-profile hearings that examined the assault and Trump’s role in stoking his supporters to storm the building. The committee recapped their findings from the previous hearings, including depositions, in-person testimony from witnesses, and video from the attack on the U.S. Capitol.

Trump has maintained he did nothing wrong on Jan. 6, and that the investigation by what he calls the “Unselect Committee of political hacks” is a “witch hunt.”  After the hearing, he posted on Truth Social that “these folks don’t get it that when they come after me, people who love freedom rally around me.”

He continued that “it strengthens me” and “what doesn’t kill me makes me stronger.”