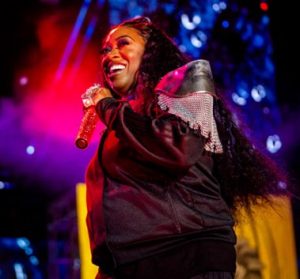 Story by Gil Kaufman • Billboard – You really can go home again. And, sometimes when you do they give you an honorary degree for your impressive accomplishments. Missy “Misdemeanor” Elliott was celebrated in her hometown of Norfolk, Virginia on Saturday (Dec. 10) during the fall 2022 commencement ceremony at Norfolk State University. The Virginia Pilot reported that Elliott encouraged the class of 400 students to keep chasing their dreams and be proud that they’ve come this far.

“I am proud of y’all, and y’all should be proud of yourself,” Elliott sold the students. “I want you to look at each other and say, ‘You already won.’ Let ’em know! Ain’t no winning, you already the one. ‘Cause y’all coulda been doing anything else the last few years, y’all coulda been wildin’ out, but y’all decided to finish the course. And that’s major.”

“I’m looking around and I see innovators, visionaries, leaders created in here,” the hip-hop icon said while rocking the school’s green and gold colors during the institution’s 109th graduation ceremony, during which she received the Presidential Commencement Medallion, the institution’s most prestigious award; Elliott also received an honorary doctorate in humane letters as a recognition of her “outstanding professional achievements and extraordinary contributions to public service.”

“I want to see these same faces years from now saying … ’I became famous, I became president, I became a lawyer.’ All of those things,” the rapper added, according to the Pilot.

As part of her support for the local community, Elliott also presented the university with a check for $20,000 to address its “area of greatest needs.”

“Two time Doctorate ‘Dr. Elliott’ I am so Humbly Grateful🙏🏾Thank you @norfolkstateuniversity for having me today & showing so much love 🙌🏾 To the Class Of 2022,” Elliott wrote on Instagram along with images of the ceremony and snaps of her with university officials, as well as a shot of a pair of special green and gold commemorative sneakers with her picture on the side. “May your Journey be Successful/ Fearless/ Determined to be the BEST! Behold The Green & Gold!!!!”

Elliott got her first honorary doctorate from Berklee College of Music in 2019.