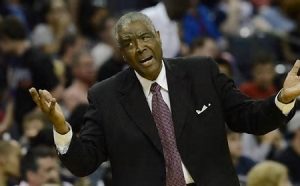 Story by Scott Fowler, The Charlotte Observer • Paul Silas, an NBA star player who later was the head coach of the Charlotte NBA franchise on two different occasions, has died. He was 79.

Silas coached both the Charlotte Hornets and the Charlotte Bobcats, leading the Hornets to four straight winning seasons in the Queen City from 1998-2002. He also played for 16 years in the NBA and was known for his rebounding prowess and his durability.

Silas won three NBA championships as a player with Boston and Seattle and exactly 400 games as an NBA head coach counting playoff contests. His son, Stephen Silas, now serves as the head coach of the NBA’s Houston Rockets.

“Paul was an incredible leader and motivator who served as our head coach on two occasions,” Charlotte Hornets owner Michael Jordan said in a statement. “He combined the knowledge developed over nearly 40 years as an NBA player and coach with an innate understanding of how to mix discipline with his never-ending positivity. On or off the court, Paul’s enthusiastic and engaging personality was accompanied by an anecdote for every occasion. He was one of the all-time great people in our game, and he will be missed.”

After his second and final stint as Charlotte’s head coach ended following the 2011-12 season, Paul Silas and his wife, Carolyn, remained a frequent presence at Hornets’ home games. Current Hornets head coach Steve Clifford said that when he first got the Charlotte job in 2013 that Silas repeatedly reached out to try to help him.

“He went out of his way to develop a friendship and was great in guiding me through being a first-time head coach,” Clifford said of Silas Sunday. “He used to sit right behind the bench. He used to come to practice a lot. He took me to lunch a lot and give me advice, about everything from X’s and O’s to leadership…. The other part for me was he was such a great player, and a lot of his career was with the (Boston) Celtics. I’m from northern New England, and so for my family, I mean, he was a god. He was larger than life.”

While he was the head coach of the Cleveland Cavaliers, Silas also directed the rookie season of future NBA superstar LeBron James. Silas remains the last coach to direct the Hornets to a playoff series win, in 2002. A cause of death wasn’t immediately available.

Silas could be a stern presence in the locker room — he once had a physical confrontation in 2012 with an underachieving Bobcats player named Tyrus Thomas — but was beloved outside of it due to his genial nature and sense of kindness. When the Bobcats told him he wouldn’t return as head coach after he directed the ignominious 7-59 season of 2011-12, Silas held a farewell news conference, then stuck around to shake every reporter’s hand afterward.

George Shinn, the Charlotte Hornets’ original owner, both hired and fired Silas as a coach.

“I loved his attitude,” Shinn said in an interview Sunday. “Paul Silas was a brilliant coach and a great competitor. He handled players so well. For a tough guy like Anthony Mason, he treated him tough, which was the way Mason treated everybody. But after a difficult conversation, Paul would put his arm around him.”

When the Hornets moved to New Orleans in 2002, Shinn kept Silas as his head coach. But then the owner fired Silas after the 2002-03 season, even though New Orleans had gone 47-35 that season.

Silas then showed up unannounced at the front door of Shinn’s home in New Orleans.

“He had never been to my house at that point,” Shinn said, “and suddenly I peeked outside and there was this mountain of a man coming to the front door. It was Paul. It made me really nervous. But I went to the door, and he couldn’t have been sweeter. Paul said, ‘I want you to know everything is fine with me. I don’t agree with you, but I understand this happens sometimes in the NBA, and I want you to know I still love you.’ ”

Wrote basketball great Magic Johnson on Twitter: “Paul made a huge contribution to the game of basketball and will be sorely missed!”