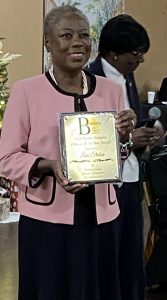 The Bamberg County Chamber of Commerce held its 56th annual awards ceremony on December 1st at the Bamberg Civic Center. Keynote speaker Dr. Willie L. Todd, Jr., president of Denmark Technical College, reminded the audience of some 200 persons that having a heart of gratitude and respect are core values that shape the character of individuals.

The ceremony concluded with the presentation of awards to citizens

who have volunteered their time, talent and treasury to the benefit of Bamberg County.

This year, two honorees shared the award named in honor of Waddy Thompson, who served as executive director and economic director of the Chamber for many years. Lisa Stokes, co-founder of the Sekots Foundation, and Dianna Richburg were both named the 2022 Waddy Thompson Citizen of the Year.

Recognition was also given to Frances Johnson and Jerry Bell for their years of relentless dedicated service to the Bamberg County Chamber.

Posted in Across Black America, Across the State, Breaking News, In the Midlands, News, Pee Dee News, Uncategorized, Upstate News