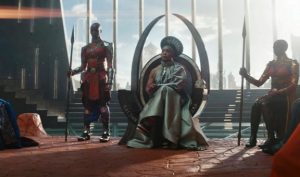 Anne Brown, The Moguldom Nation – “Black Panther: Wakanda Forever” swooped in over the weekend and saved a dreary box office. Moviegoers have been hesitant to spend money on films this fall, but they turned out for the second installment of Marvel Cinematic Universe’s “Black Panther” tale. “Wakanda Forever” raked in a whopping $180 million for its opening weekend (Nov. 11-13), the highest November debut ever for a film. And this happened even without the lead character, actor Chadwick Boseman, who played the “Black Panther” in the 2018 film before dying in August 2020 of colon cancer at 43.

Still, people plunked down nearly $14 per ticket to see the Ryan Coogler-directed “Wakanda Forever,” as it made the second highest box office this year, following “Doctor Strange in the Multiverse of Madness,” which opened in May, CNBC reported.