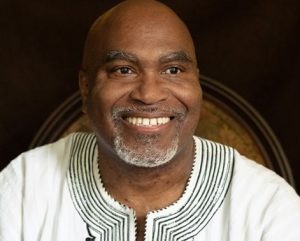 Denmark, S.C. – Award-winning author Daniel Black, Ph.D., will be the Lyceum Series speaker in November at Voorhees University. The successful writer of seven books will talk on Nov. 3 at 11 a.m. in Massachusetts Hall. The first 125 people in attendance will receive free copies of “Don’t Cry for Me,” courtesy of the Wright Potts Library.

Released by HarperCollins on Feb. 1, 2022, “Don’t Cry for Me” is an epistolary novel following Jacob, who is dying as he tries to make amends with his gay son through a series of letters. Fellow author and National Book Award winner Jesmyn Ward says, “‘Don’t Cry for Me’ is a perfect song: the epistolary dirge of a man singing to his son as he faces death by cancer. At turns intense and funny, tender and brutally honest, Jacob’s letter to his son, Isaac, is revelatory. It’s a beautiful book. Read it.”

Black’s published works include “They Tell Me of Home,” “The Sacred Place,” “Perfect Peace,” “Twelve Gates to the City,” “The Coming” and “Listen to the Lambs.”

In 2014, he won the Distinguished Writer’s Award from the Mid-Atlantic Writer’s Association. The Go On Girl! National Book Club named him “Author of the Year” in 2011 for “Perfect Peace,” which also was chosen as the 2014 selection for “If All Arkansas Read the Same Book” by the Arkansas Center for the Book at the Arkansas State Library. The novel has been reprinted more than 10 times and is heralded as an American literary classic. Black has also been twice nominated for the Townsend Literary Prize, the Ernest J. Gaines Award, the Ferro-Grumbley Literary Prize, the Lambda Literary Award and the Georgia Author of the Year Prize. His works have been celebrated by National Book Award-winning author Charles Johnson and Pulitzer Prize-winning author Alice Walker.

Along with writing, Black is a professor and activist. He works intermittently as a diversity consultant, and he has spoken at different companies, including Google, Chan Zuckerberg Initiative, AT&T and Global Payments. He assists corporations with the goal of creating a work environment in which all employees feel supported and valued.

A native of Kansas City, K.S., Black spent his formative years in rural Blackwell, A.R. He graduated from Clark College (now Clark Atlanta University), where he earned the Oxford Modern British Studies fellowship and studied at Oxford University. He was awarded a full fellowship to Temple University, where he studied with the poet laureate of the Black Arts Movement, Sonia Sanchez, and earned his doctoral degree in African American Studies. Black is now a professor of African American Studies at his alma mater—Clark Atlanta University.

Black lives in Atlanta and is the founder of the Ndugu-Nzinga Rites of Passage Nation, a mentoring society for people of African descent. His next work will be his first collection of essays entitled “BLACK ON BLACK” and is scheduled for release on Jan. 10, 2023.

Posted in Across Black America, HBCU News, HBCUs, In the Midlands, News, Uncategorized