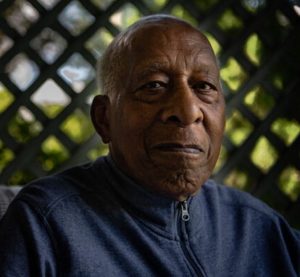 Daniel R. Smith, a civil rights demonstrator born to an enslaved father, passed away on Wednesday, Oct. 19, according to The Washington Post. He was one of the remaining living people whose parents were in American bondage. Reporters say he died at a hospital in Washington at age 90.

Smith, who grew up in the 1930s, remembers sneaking out of bed to listen to his father, Abram “A.B.” Smith, talking about his slavery days.

“I remember hearing about two slaves who were chained together at the wrist and tried to run away. They were found by some vicious dogs hiding under a tree and hanged from it,” Smith told The Post, along with other horrific incidents that took place on Southern plantations. “My father cried as he told us these things.”

Sana Butler, who extensively documented Black Americans born to enslaved people, said Smith was a living reminder that “that slavery was not that long ago.”

“You talk about the transatlantic slave trade, you talk about Reconstruction, and people really think that it’s history,” Butler told reporters. “Mr. Smith is a reminder that it’s impossible to ‘get over it,’ because it’s still [present] within these families’ lives.”

Smith’s father was born into slavery during the Civil War in Virginia, and his family eventually escaped to Connecticut. They were the only Black Americans in the town. Smith himself was born on March 11, 1932, in Winsted, Connecticut to his 70-year-old father and a white mother.

Smith said he and his five siblings were “poor as church mice,” but one of his surrogate fathers, a white veterinarian, gave him a job at his clinic. There, he grew a fondness for animals and dogs and even wanted to join the Army’s K-9 Corps. Unfortunately, recruiters said they weren’t looking for Black soldiers, so he served as a medic in the Korean War.

After his time in the war, Smith marched with Dr. Martin Luther King Jr. for civil rights, ran a federally-funded program focused on providing health care for underserved communities, and he met with Archbishop Desmond Tutu during apartheid in South Africa. He was also present for Barack Obama‘s historic inauguration as the nation’s first Black president.

While Smith got busy in life, he said he always felt privileged for being part of a legacy — being one of the last surviving children of people who were considered property over a century ago.

“A lot of Black children grew up in a world where they didn’t know who they were and where they came from,” Mr. Smith told reporters in 2020. “But we were A.B. Smith’s children, and that sustained us through anything.”