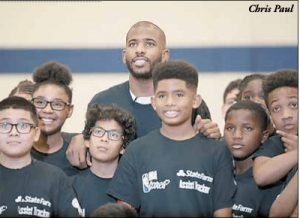 This year, Phoenix Suns point guard Chris Paul will receive the Thurgood Marshall Award of Merit during the event. The Thurgood Marshall Award of Merit is bestowed upon Arizonans whose actions have demonstrated an outstanding commitment to making the Valley of the Sun, the State of Arizona, and the world better. Paul, considered to be a luminary, has dedicated his life to the principles of justice, equality and excellence that remain fundamental tenets of Justice Marshall’s legacy.

In his home state of North Carolina, he is part owner of the Winston-Salem Dash and owner of the CP3 Basketball Academy. His production company, Ohh Dip!!! Productions, creates content across multiple platforms; he has executive produced projects, including: Chapter 3; Crossroads; The Game Changers; Blackballed; Why Not Us: NC Central Men’s Basketball, FAMU Football and Southern University Dancing Dolls; and The Day Sports Stood Still. Ohh Dip!!! co-produces Bloomberg Quicktake’s “How I Got Here,” an in-depth weekly one-on-one interview series hosted by Paul and the series “Front Office.”

The Chris Paul Family Foundation continues to provide resources that enrich and strengthen underserved communities across the country. Paul’s foundation has been an outstanding supporter of Alpha Phi Alpha Fraternity’s Project Alpha national and local programs.

Paul co-launched the Social Change Fund dedicated to investing in and supporting organizations focused on empowering communities of color and advocating for the human rights of all Black lives. His philanthropic efforts have earned him the 2016 ESPYs “Humanitarian of the Year” award, 2016 Mannie Jackson Human Spirit Award and the NBA Community Assist Award five times. He also is the inaugural recipient of the Kobe and Gigi Bryant award by the WNBA for his ongoing support of women in sports.

In 2022, Paul was appointed by President Joe Biden to the HBCU Advisory Council.

The theme for this year’s brunch is: “Preparing for Today’s New Normal in Education & Entrepreneurship.” The keynote speaker, Ronnell Richards, will deliver a powerful message that addresses the theme and gives students and professionals the encouragement they need to push forward during this extremely challenging period in all of our lives. Richards is an award-winning entrepreneur, senior sales executive, sales trainer, motivational coach and speaker.

Through the brunch, the SEF and TMCF raise funds to financially assist local graduating high school seniors in their pursuit of completing a college education. The SEF is the nonprofit arm of Alpha Phi Alpha Fraternity’s Phoenix Alumni chapter.

Local businesses, organizations and residents are invited to support the 18th Annual SEF Thurgood Marshall College Fund Brunch by purchasing tickets and/or sponsorships. Visit sphinxeducationalfund.org, for more details on how to support the event.